SINCE 1992 THE ALLIANCE HAS PRESENTED THE WATKINS AWARD TO PROMOTE ACADEMIC EXCELLENCE AMONG YOUNG AFRICAN-AMERICAN MALES. 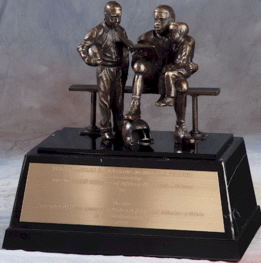 The National Alliance of African American Athletes was at an organizational crossroads. He was stunned by the sudden death of co-founder Franklin D. Watkins. The group was committed to continuing the work Watkins had begun to mold and equally committed never to forget the many contributions he had already made. It was decided that Watkins memory would be perpetuated by the National Alliance of African American Athletes by honoring a student with a trophy bearing his name annually

As unavoidable role models on the “image” front lines, talented athletes-especially in football, basketball, and baseball-define what the emerging generations of African-American males will value and the aspirations they will have. The Watkins Trophy Award is a means for recognizing exceptionally talented African-American male athletes who, by their example, help promote high academic standards and a commitment to community service.

Because they were concerned with helping students recognize the value of education and increasing the awareness and involvement of parents and businesses throughout the community, Jostens Inc., through its Renaissance program, has produced an elegant Franklin D. Watkins Memorial Trophy for the winner and plaques for the runners up. As a tribute to African-American high school seniors for their outstanding achievements in athletics, scholarship, and community service, the Watkins Trophy Award is forcefully demonstrating that academic excellence and community service are valued and rewarded.

Why Focus on African-American Males in High School?

What Makes the Watkins Award Special?

By the time a high school senior is a finalist for the Franklin D. Watkins Memorial Trophy Award, he will have received numerous awards, dominated the attention of high school recruiting magazines, and appeared regularly in the media. What then does the Watkins Trophy Award bring to a young man’s life?

Excerpts from a letter by Shane Battier, a 1996 finalist, illustrates what is expected of Watkins Trophy Award recipients:

Throughout my adolescence, I have not been the “average teenager.” My stature and character have always set me apart. Some call me an inspiration, a leader, and a pillar in the community. Being a 6’8″, intelligent, articulate black man, I know I defy many stereotypes that modern society places upon me. I know I am different. I do not run nor duck my uniqueness, but rather embrace it and take advantage of it to become a leader in our society. I show society that one can be successful at all vantage points in life without compromising one’s integrity and morals. I show the world that old-fashioned hard work still pays off even in a very technologically advanced society. My success transcends economic, racial, and social boundaries to provide a standard for people of all races, religions, and creeds…I take my position as a leader very seriously. I believe that along with my success on the basketball court comes the responsibility of being a role model and teacher for not just today’s youth but society as a whole. It is a responsibility that does not end with the end of my basketball career, but I will continue to uphold it throughout my life—excerpts from a letter by Shane Battier, a 1996 finalist.

Mr. Franklin D. Watkins was born on January 8, 1945, in Columbia, South Carolina. He was the son of the late Deacon and Mrs. Leroy (Beatrice Harris) Watkins. On Saturday, August 24, 1991, he departed this earthly life in Harrisburg, Pennsylvania.

At an early age, he joined the Ridgewood Baptist Church and later became affiliated with Harris A.M.E. Zion Church in Harrisburg, PA.

He was a graduate of C. A. Johnson High School, and he later attended Allen University of Columbia, South Carolina. He received his Associate Degree from Harrisburg Community College in Pennsylvania.

“Frank,” as he was affectionately called, was very active in the community and civic affairs, particularly those that involved young people. He was a little league basketball coach for many years. At the time of his death, he was a coach with YMCA Youth Basketball League in Harrisburg, PA.

"We are thankful for the things you are; And for the things you’ve done. To make one world a better place; Our lives happier. We are hoping you will understand; We are very proud and glad; To have someone as wonderful as; You to call our DAD" - Cedrick Watkins and Dearaney Watkins.

The Franklin D. Watkins Memorial Trophy Award was initiated in 1992 to promote academic excellence among young African-American males. Since 1992, high school seniors have been honored with the title “Premiere African-American Male Scholar-Athlete.” The real significance of the Watkins Trophy Award can be captured in one word- “EXPECTATION.” Watkins Trophy Award finalists are expected to be leaders in efforts to empower and improve disadvantaged communities. It brings young men to face to face with the reality that they have an opportunity and an obligation to do more for their communities through sports. What they do and say will transcend sports and have a significant impact on society.

The Watkins Award has become the preeminent award bestowed on the top High School Scholar-Athlete in the Nation. The finalists are chosen based on their: